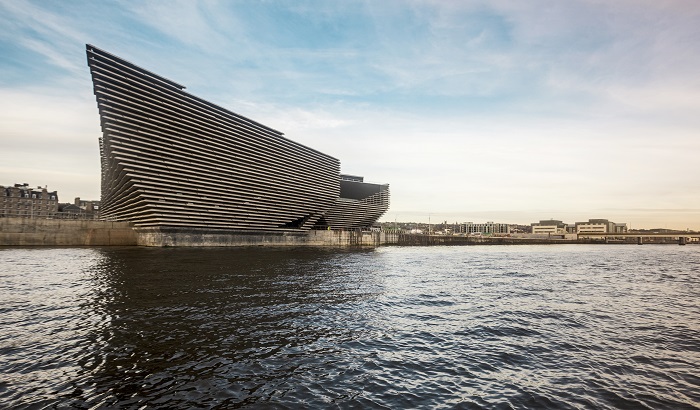 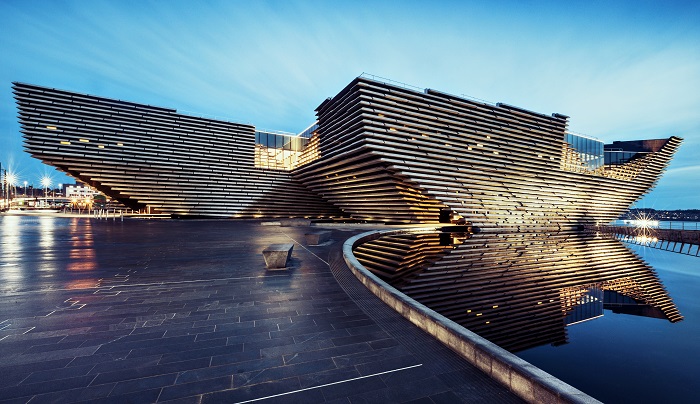 Scheduled to open on 15th September, this is the only Victoria & Albert Museum outside London and hopes to become an international centre design, a place of inspiration, discovery and learning that will also promote the extraordinary history of design.  It is designed by Kengo Kuma, the winner of an international competition.  The extremely powerful image he has created really captures the visitor’s imagination and reminds us that inspiration comes from the place where a building is constructed. 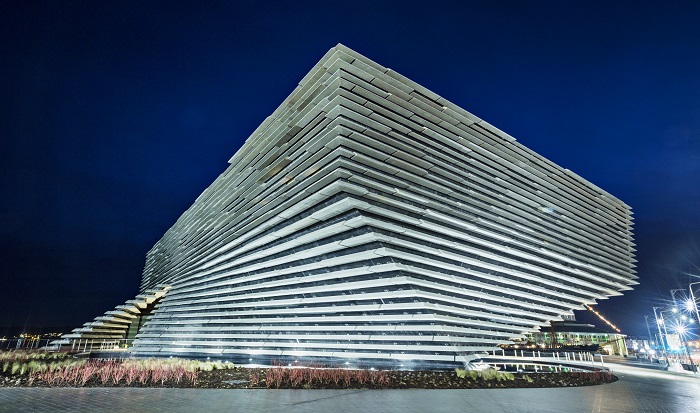 The building successfully conveys a sense of being a “social meeting place for city”, somewhere pleasant to go and spend time overlooking the shores of the North Sea. Dundee is the fourth biggest city in Scotland in terms of population and this building sets out to evoke the jagged and rugged outlines of Scottish cliffs. 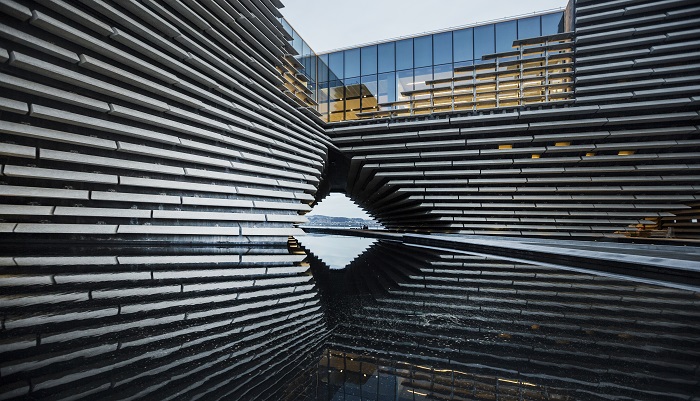 Constructed out of seven curved concrete walls covered with 2500 pre-cast rough stone panels, it extends three floors above ground covering an area of 8000 m², including 1650 m² of gallery space. It stands at the centre of £1 billion project designed to transform the waterfront where the docks used to stand. 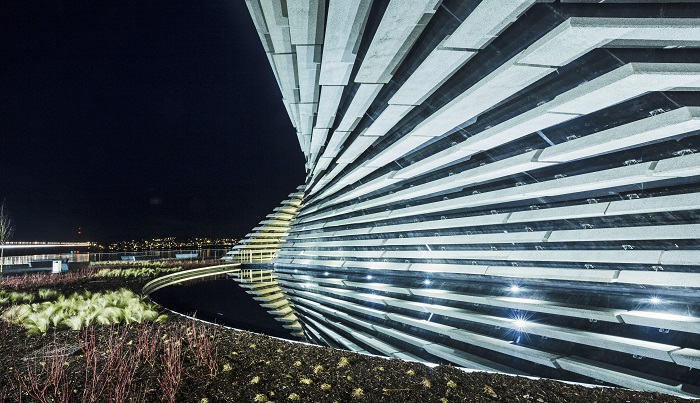 It extends across the River Tay and connects the city to its waterfront. It is intended to provide a picture of a potentially much more extensive cultural project, similar to what has happened in Bilbao. 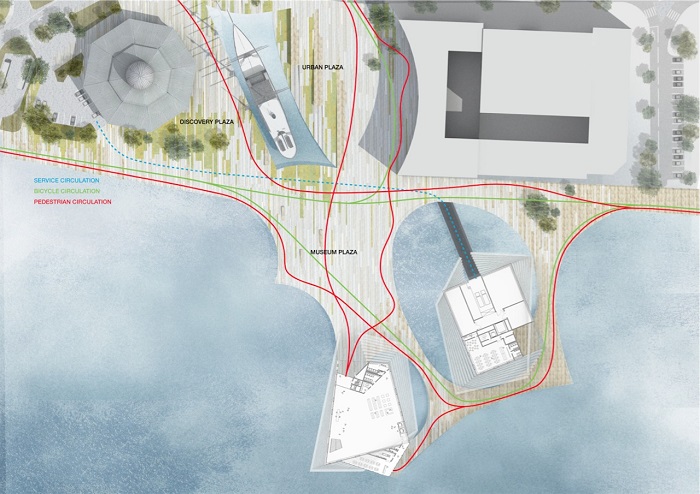 Inside it hosts permanent galleries of Scottish design and features an extensive schedule of temporary exhibitions showcasing the most interesting objects on the international design scene. 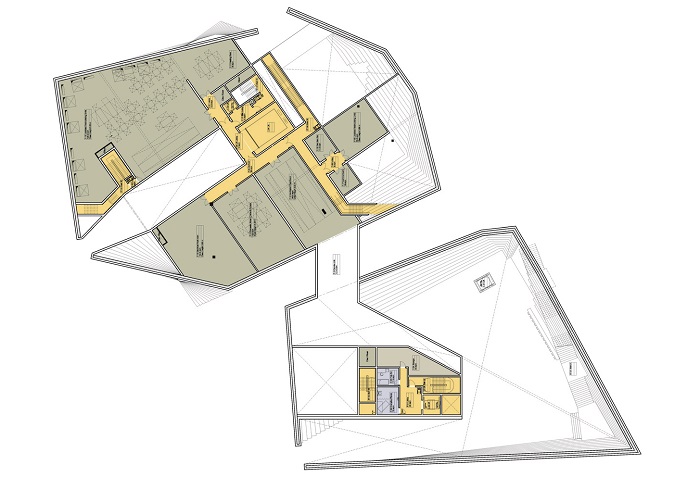 Plenty of room has also been allocated to show off the work of up-and-coming designers and cutting-edge creative projects. The Scottish Design Galleries are located in the very heart of the building to provide an overview of this great artistic legacy. 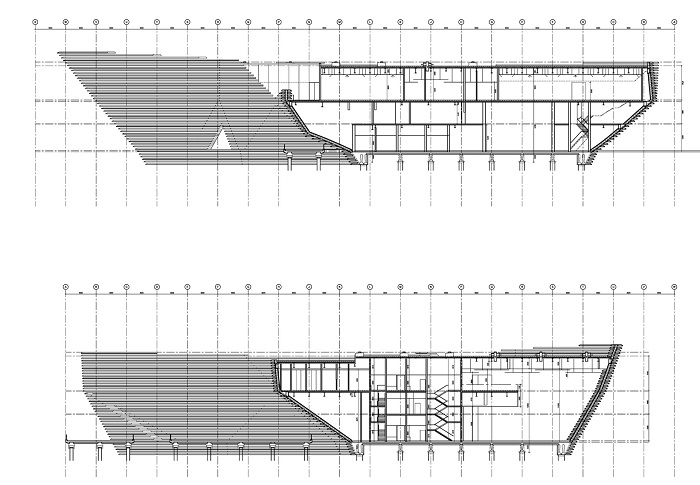 Entry to the galleries is free of charge, as in the case of most other British museums, and they display a total of 300 objects from the various V&A collections and from museums and private collections, covering everything from architecture, pottery, engineering, fashion, furniture and health care to jewellery, fabrics and even video game design. An authentic masterpiece stands in the very centre of the building: Charles Rennie Mackintosh’s extraordinary Oak Room that has been completely restored and conserved in partnership with Glasgow Life. 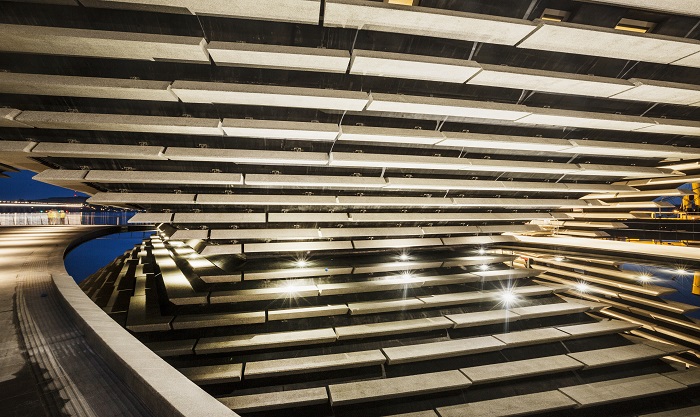 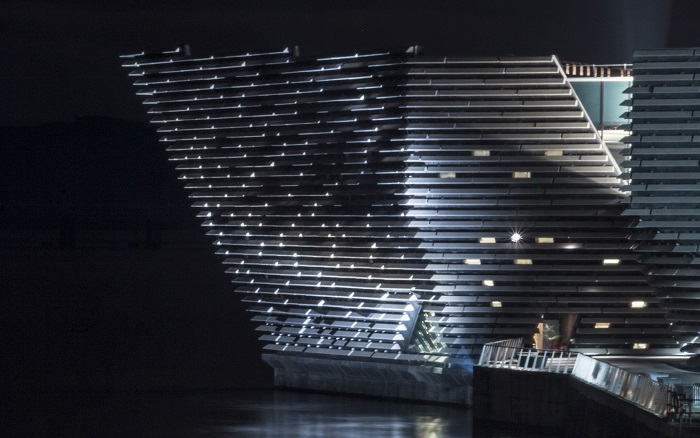 Among other things, the new museum will allow the most ambitious exhibitions to be shared throughout the United Kingdom. The opening exhibition entitled “Ocean Liners: Speed & Style”, supported by players of the People’s Postcode Lottery and investment managers Baillie Gifford, explores projects for a transport system that has spread worldwide and embodies the aspirations of millions of travellers. 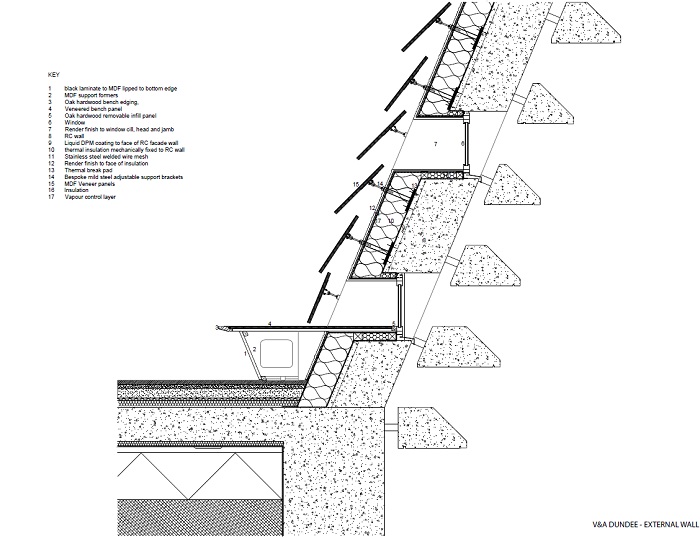 The exhibition, organized in partnership with Peabody Essex Museum in Salem, Massachusetts, is the first to explore the design and cultural impact of ocean liners on an international scale. It showcases the golden age of ocean travel and explores various aspects of ship design ranging from engineering and architecture to interior design, fashion and even on-board lifestyle. Mario Pisani 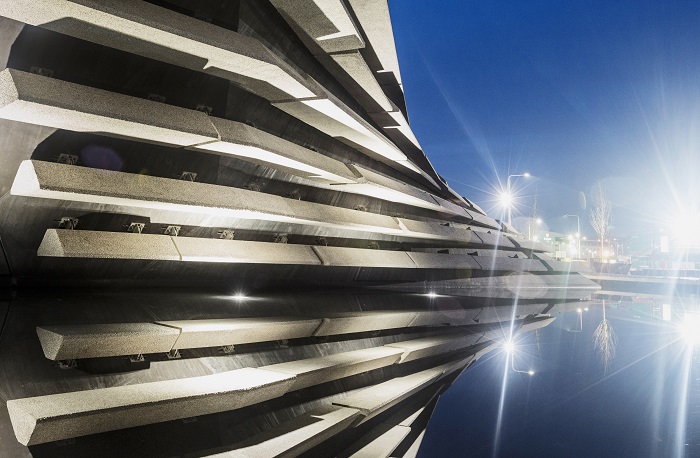