The new Milan Polytechnic campus in Lecco is actually a conversion of the old hospital facility in Via Ghislanzoni dating back to the 1930s, just outside the southern boundaries of the old city centre. Paolo Bodega has had to design a project catering for a highly historical setting, redeveloping the cityscape and partly renovating the old existing construction. The highly detailed building programme was provided by Milan Polytechnic, which wanted to equip itself with new classrooms, laboratories and offices for a student population of 2000. Paolo Bodega designed a work of architecture that is much more than just a simple design in a historical setting, managing to create an incisive and highly technological project that will inevitably become a new landmark on the urban fabric. The architecture is white while, in contrast, the pathways are colourful. Colour guides people around the campus while highlighting its functional program. On the outside, in contrast, it is textured concrete that identifies both the pedestrian ways and roadways. The shells are made of steel and glass. The cornices and moulds on the carefully constructed facades of the 20th century building have been converted into linear facades in Bodega’s architectural design, also incorporating shutters whose carefully gauged and aesthetically pleasing technological features are a real delight. 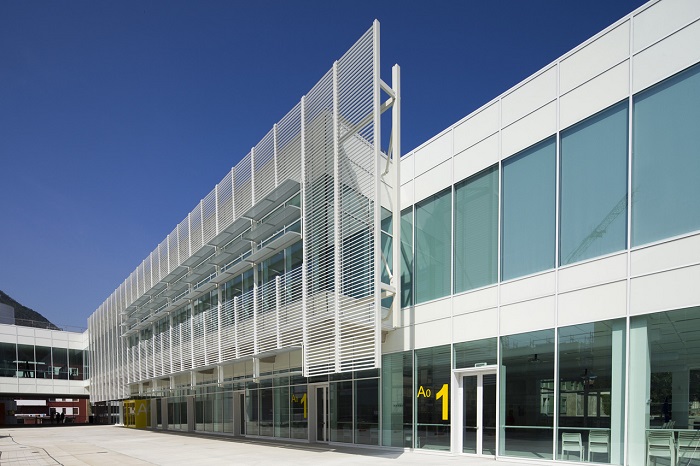