The property at 25, rue Michel le Comte, near the Pompidou Centre in Paris, is included in the Marais neighbourhood’s Protection and Enhancement Plan. This property actually dates back to the 17th-18th century and features a mixture of distinctive hotels, craft workshops and artists. The Atelier du Pont firm offered to complete the restructuring project foreseen in the programme by reconstructing a new building in a very modern-day idiom right in the middle of the block. The project shows a desire to move away from the “Marais Museum” image in favour of a more contemporary look.

It includes a number of enterprises, whose ambitions fall in line with the site’s distinctive traits in terms of energy performance and the need to increase the amount of social housing while keeping the neighbourhood lively. The programme envisages the construction of 29 subsidised apartments and spaces for activities to be constructed in two stages, the first of which is planned to be completed by 2014. The new construction, which is built at the rear of the lot where an old totally dilapidated 19th-century building used to stand before it was demolished, is clad with vertical sunscreen panels made of perforated metal. The ground floor accommodates the activity spaces and there are 10 apartments on the upper floors. These housing units, served by a lift that has been built by extending the ground-floor landings, come in a wide variety of different designs, all of which offer plenty of privacy. 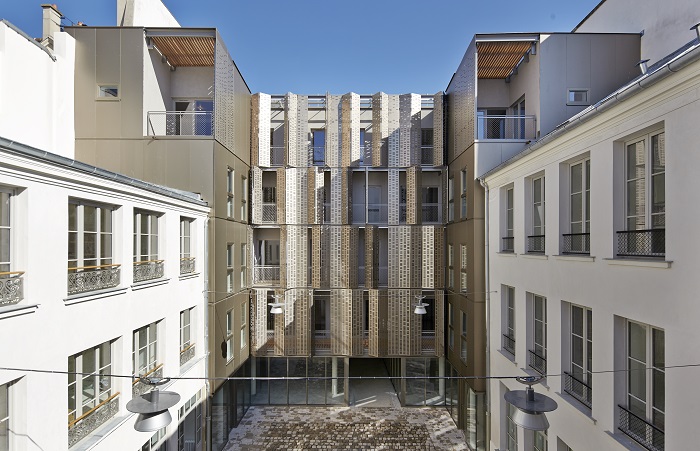