The spatial qualities of the interiors, as well as the formal configuration of the exterior of Sharifi-ha House directly respond to the displacement of turning boxes that lead the building’s volume to become open or closed, according to changing seasons or functional scenarios. The openness/closure of the building’s volume is a reference to traditional Iranian houses, which would dynamically serve as seasonal modes of habitation by offering both a Zemestan-Neshin (winter living room) and Taabestan-Neshin (summer living room) to their residents. In summertime, Sharifi-ha House offers an open /transparent /perforated volume with  large terraces. In contrast, during Tehran’s cold, snowy winters the volume closes down, offering minimal openings and a total absence of the wide summer terraces. The house is distributed over seven floors: the two basement floors are for family conviviality, fitness facilities, and wellness areas, while the ground floor hosts parking and housekeeping rooms. Public activities all happen on the first and second floors, and the family’s private life takes place on the third and fourth floors. The project consisted of four major parts; the fixed volume of the structure, the void, and the fixed volume and the mobile volume. When the turning boxes are closed, the building captures sunlight throughout the space of the central void, which also connects the two fixed volumes by suspended bridges. The structural system of this “moveable” house is inevitably irregular. The main loads all rest on the beams of the living rooms. Due to the various configurations the turning boxes may take, the loading calculation has been estimated based on the largest possible loading value applied to the system. Additionally, controlling the probable vibrations to prevent structural deformation in the turning boxes was taken into account during the design process. 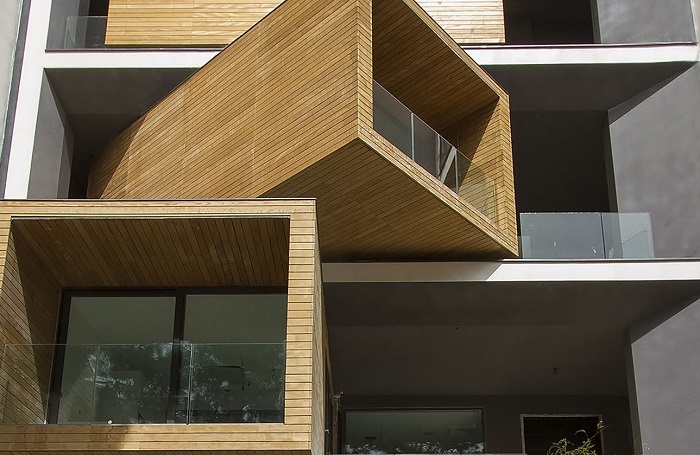