This library designed by Miguel Arruda is a building full of thought and content. Simple in the way only an intensive work can be, guided by a certain curiosity to explore all the various possibilities of being and becoming inherent in a of a piece architecture. The new building results from a transformation of an abandoned manufacturing plant.  “I did not want the library to be a dead space, I wanted it to be somewhere the local people actually visited". That is why I fought to alter the original functional program by incorporating new facilities: a small coffee bar, an exhibition space and, above all, a children’s area. The architectural designer envisaged the tall structure of the old industrial facility that used to be located where the library was to be built as the starting point for his architectural design. “I thought about the tall old structure as a great means of inspiration for me.”. Building upwards meant going against the natural horizontal contour of the riverside. Hence the building really plays on this counterbalance between the horizontal landscape and vertical layout of the interiors. The structural design is based on a simple operation of removing a corner from a pure cubic structure that actually dates back to industrial times. The large triangular opening resulting from this operation corresponds to a vertical void allowing the various library interiors to be visually interconnected. The hub of vertical links becomes a gigantic reinforced concrete column and is de-centred over on the south-west side of the building, freeing up space to be allocated to the library. The internal vertical void erodes away the north-east corner of the structure, which is enclosed around the perimeter to create a metal structure hanging from above to minimise the space taken up by structural columns. The public footbridge that wedges into the structure about halfway up near the north-east corner plays dynamically with the oblique cuts in the façade, and its horizontal energy seems to generate the composition’s overall kinetic thrust. The footbridge does not provide direct access to the library, but glazed visual apertures open up along the landings of the staircase that leads to the ground floor and public plaza to create a startling visual short-circuit between the urban exterior, landscape, public pathway and library’s inside facilities. “This work of architecture has allowed the people of Vila Franca to really perceive their city and river together for the very first time”. A lack of resources called for elegant but austere use of simple materials. Black painted concrete, white walls, resin floors, glass and glazed panels. 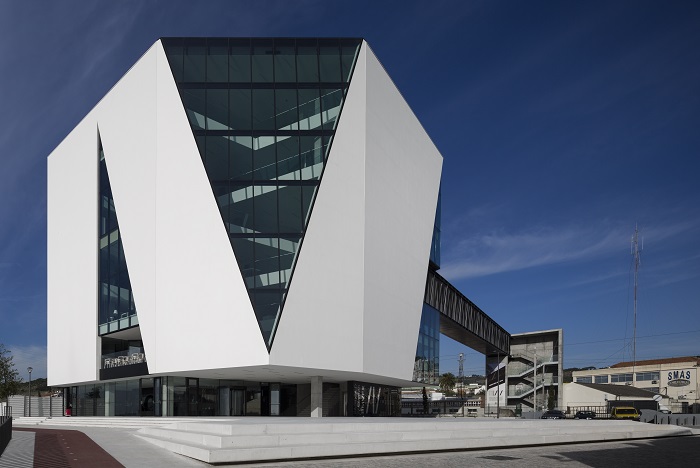