“The new bridge should be simple and frugal but not bland. It will look like a ship moored in the Valley: a bridge made of bright, clear-coloured stainless steel. During the daytime, it will reflect the sunlight and absorb solar energy, which it will then give off at night-time. It will be an austere looking bridge in line with the character of the people of Genoa”. That is how Renzo Piano described his bridge and that is just the way it is. It has been constructed so quickly, in less than two years, that a new political-media slogan has been coined “the Genoa method”. The description of the work is as brief as the time it took to construct this engineering feat. In just a few lines, it sums up what the Genoa-born architect had in mind. 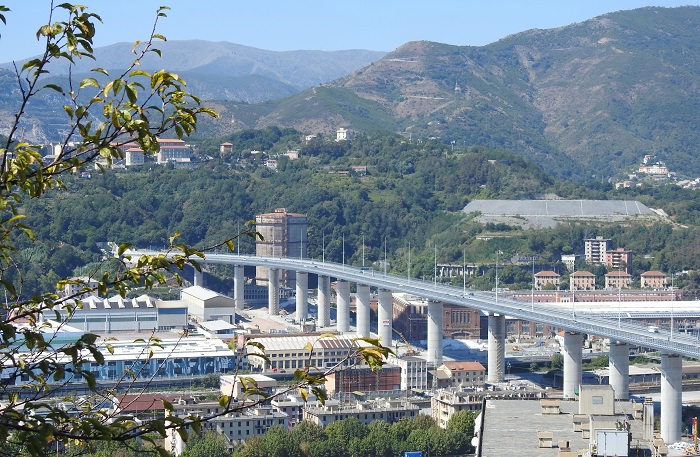 Premise: the bridge designed by the great structural engineer Riccardo Morandi stood for 54 years and did not collapse for any fault of his but due to a criminal lack of maintenance, which caused the death of 43 people on 14th August 2018 (with 566 people forced to abandon their homes beneath the bridge). We, the inhabitants of Genoa, crossed that strip of asphalt hundreds if not thousands of times, proudly admiring a construction that was truly innovative back in its day (it officially opened in 1967). In the age of fake news, there was even a rumour after the tragedy happened that Morandi had committed suicide after hearing the news that his bridge had collapsed. As we all know, the great structural engineer actually died at the age of 87 in Rome on Christmas Day 1989. The guilt lies with others. 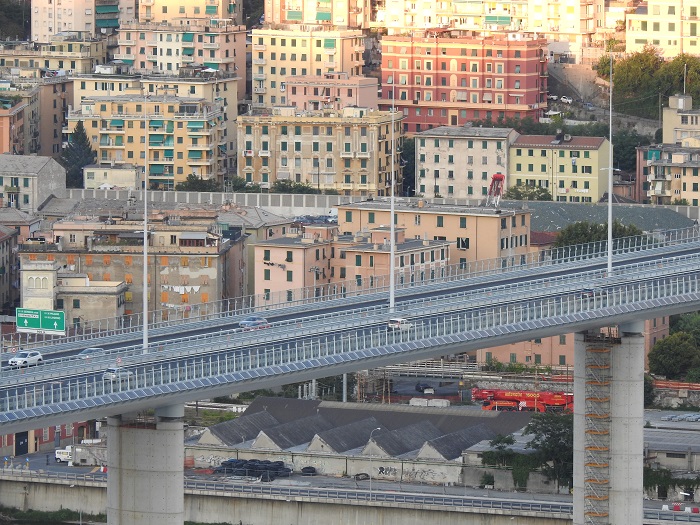 77 people are currently under investigation, including former executives of ‘Autostrade per l’Italia’ and ‘Spea’, as well as officials belonging to the Ministry of Infrastructure and two companies for administrative responsibility: multiple manslaughter, culpable disaster, failure to assure transport safety, and fraud. The investigation is currently underway, although it has been interrupted due to the Covid-19 pandemic. There is no doubt that the bridge across the River Polcevera is a fundamental link for road connections and transport in Genoa, Liguria and, hence, the rest of the country. 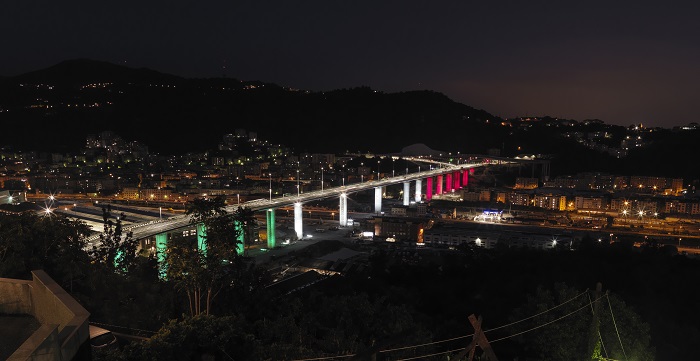 Urbanistic and communication factors are one of the keys to Renzo Piano’s project. Not forgetting the new bridge’s symbolic value and contribution to the city’s revival. Nevertheless, since it is an urban bridge for crossing the city, its designer gave very careful consideration to its relationship with its surroundings in the Genoa area. The construction is held up by 18 reinforced concrete piles with elliptical sections (measuring 4 m x 9.5 m). There is a 50 m gap between each of the piles, except for the three central bays (100 m). What the designer described as “elliptical geometry with no clean angles” means that light “slides across” the surface of the piles themselves to prevent any excessive or exaggerated impact on the urban environment it crosses. 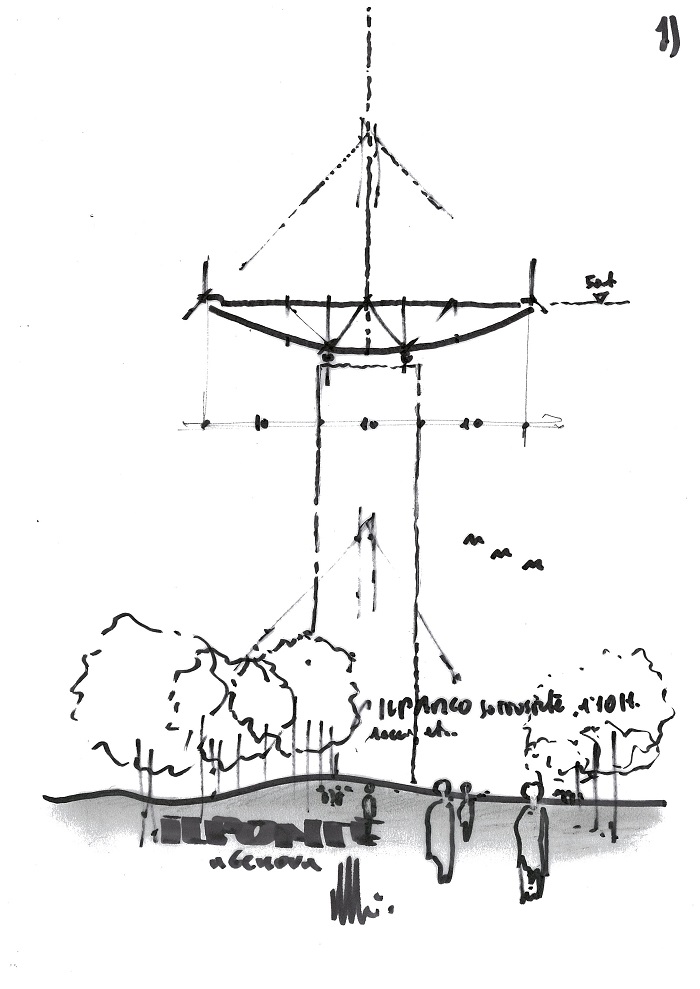 The same applies to the foundations, which are not too big so as not to impact excessively on a setting characterised by buildings of various different kinds while, however, clearly focusing on anti-seismic factors. Obviously, due to the success of the previous bridge, very careful attention had to be paid to all the various structural elements in play, but Piano wanted to go further and concentrate on its symbolism as a tribute to the history of a merchant city like Genoa, so he designed the bridge to look like a ship. Or, to be more precise, the hull of a ship that tapers at the edges to reduce any visual impact. 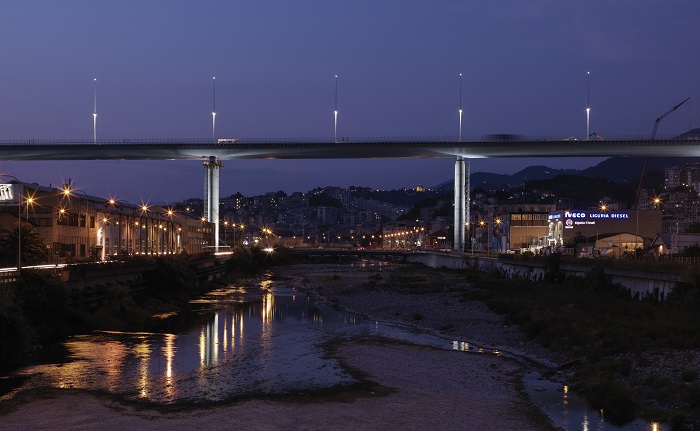 The very clear colour in which the bridge has been painted reflects sunlight effectively and also turns the construction itself into a source of light shining across the city. Construction work was speeded up considerably by the method for assembling its framework “consisting of three transversal ashlars made of different thicknesses of sheet steel extending for a total length of 26 metres”, so the technical report states. Each part or element of the bridge was designed to be built as quickly as possible and the entire operation was a complete success. 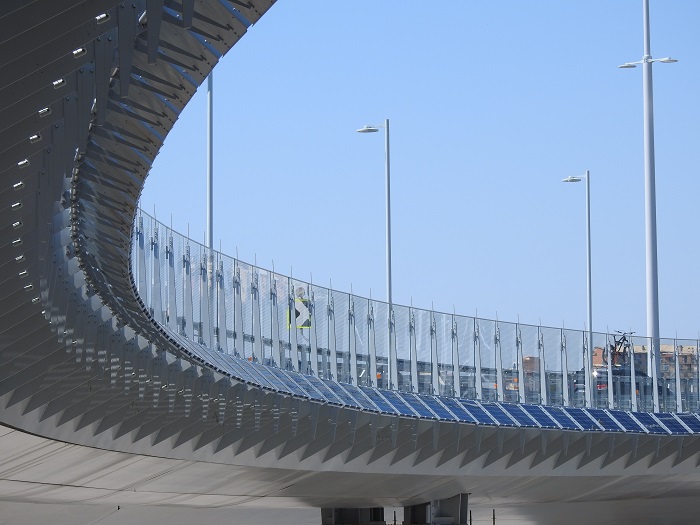 Lastly, meticulous attention was paid to eco-sustainability: photovoltaic panels have been placed along the edge of the frame to capture light to illuminate the entire construction (including, fortunately, the maintenance units) in optimum fashion. Thanks to this high-level of technology, Renzo Piano wanted to emphasise the industrial nature of Val Polcevera, turning the bridge itself into a sort of manufacturing machine. Michele Bazan Giordano 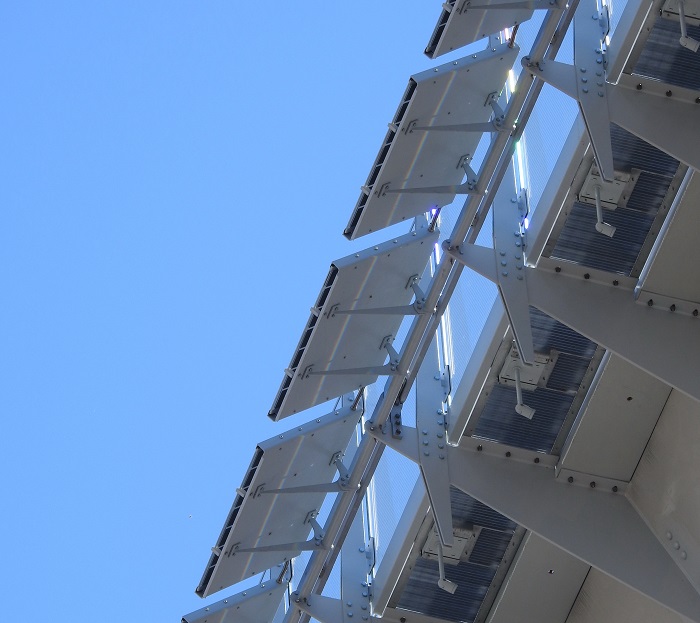 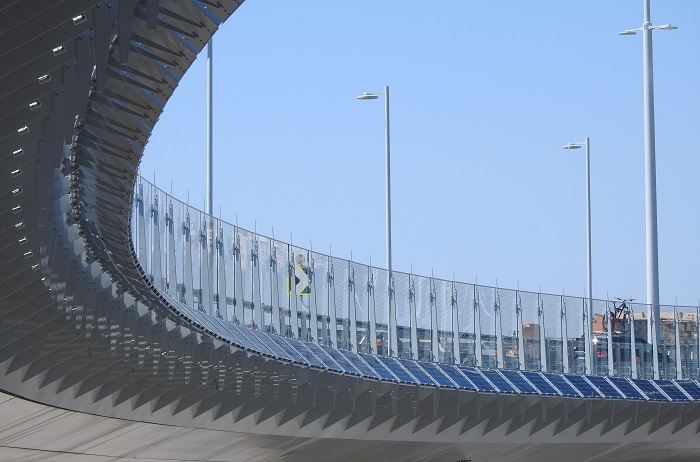