The ME building, devoted to mechanics, was built in the early 70s by Zweifel + Stricker + Associates while the campus was undergoing its first phase in development. Since the year 2000, EPFL has undertaken various projects to transform the campus, including work on the ME building that was outmoded and inadequate for the university's ambitions in terms of international growth and status. The team composed of Dominique Perrault Architecte/Steiner won an international competition launched in 2011. A new 19,000 m² rectangular building was constructed over four levels of superstructure and a level of infrastructure. Inside it holds the faculties of Engineering Science and Technology, complete with research laboratories and offices, as well as the workspaces serving the faculty of Life Sciences. The building consists of two wings connected together by a large central lobby. The two wings may be viewed as two separate buildings, whose facades feature a combination of opaque sections and glazed sections creating perspectives down towards the back of the building.

The offices take up a peripheral strip along the facade and benefit from natural light flowing in through a wide glass window opening up towards the outside. The lobby is the real heart of the building and accommodates the reception and socialising spaces and links to the workspaces. Straight staircases and sloping walkways project into the central space from one floor to another or from one side to another, breaking down how the overall construction is interpreted. This system is emphasised by the black bannisters designed by Gaëlle Lauriot-Prevost. To give the entire construction a highly cutting-edge image, without in any way concealing its roots back in the 1970s, the facades combine two quite separate architectural languages that are brought together through the materials used. One facade is constructed out of metal mesh to evoke the idea of mechanics, while the other alludes directly to the moulding of the shells of neighbouring buildings. Over to the south, east and west, a mechanical facade is constructed out of prefabricated units, whose sizes are dictated by EDFL’s own history. Each module covers an internal skin to provide the building with soundproofing and waterproofing and there is also external solar protection in the form of a frame attached to the metal meshing. The modules are fitted inside vertical panels: two are sliding panels and the third is attached in front of the opaque panel of the main façade. The panels made of metal meshing in various shades of grey are set at an angle of 5° in relation to the facade and face in alternate directions. At night-time the interior lighting really emphasises the interplay of contrasts enhancing the general effect generated by the facade design. 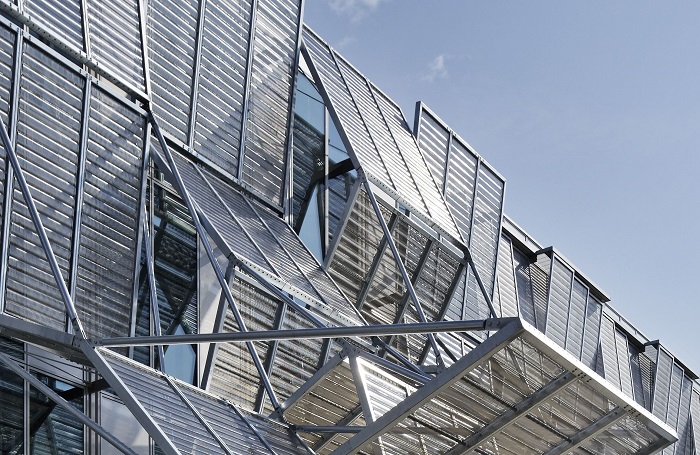