The story of Museum of Fire started when OVO firm were asked to design exposition pavilion that should promote the city of Zory and to showcase its offerings to tourists, citizens and investors as well. The pavilion was to be situated with prominence on an exposed site near the main access road to the city. The plot had a lot of disadvantages, especially a great number of underground infrastructure that left only very strange, irregular shaped piece of land to build on. The name of the city, Zory, means “fire”, ”burnt”, “flames”. In XII century, when Zory was founded, a forest was burnt in order to create free space for the new city. This tradition is still alive – there is a Festival of Fire in summer, and the logo of the city is a small flame. It became obvious to the architects, that a building should look like a fire. The strange shape of the plot suddenly started to resemble dancing flames. The building consists of three independent walls that “swim” next to each other. Their composition and shapes covered with copper plates resemble dancing flames.

Spaces between the walls are fully glazed forming entrances to the pavilion. Walls are made of architectural concrete, covered on the outside with copper and left untouched inside. The floor is paved with black stone, and continued to the outdoor elements. During the construction, when the ground was excavated, the client came with the idea to use the underground space to place a big exhibition hall there.. The building has three entrances. There is a multifunctional hall and reception/ information on the ground floor and an exposition hall underground. With restrooms and technical rooms the program is complete. Intensive landscaping is surrounding the Museum. The building and the landscape work together create a symbiosis of space consisting of Museum itself, pedestrian paths running through the pavilion and green walkways. There is a Garden of Fire foreseen – an outdoor exhibition space along the main road that will be used during Festival of Fire. 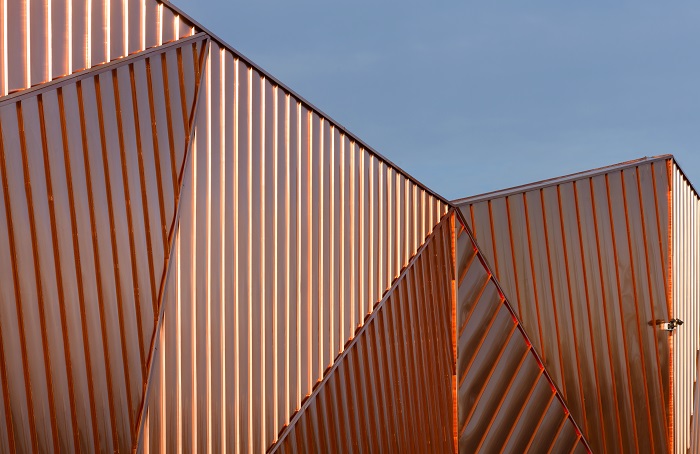