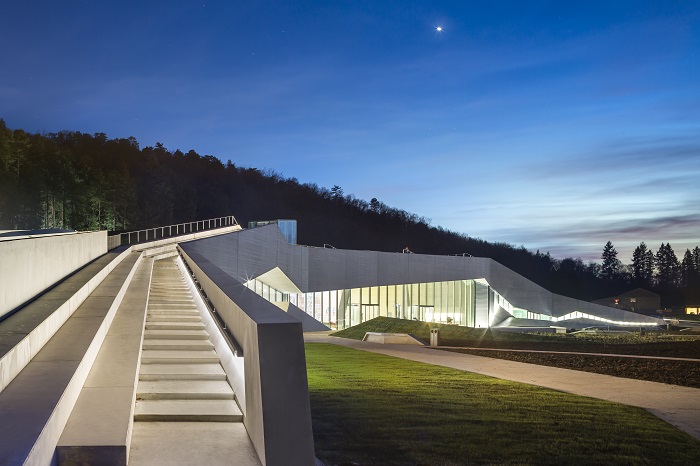 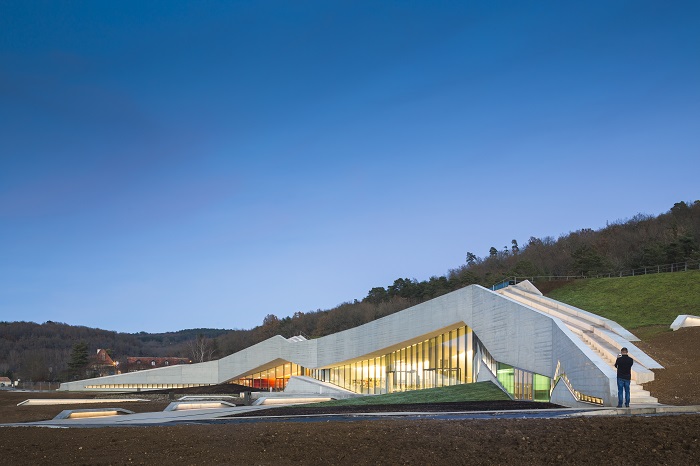 This museum houses Lascaux IV, the most recent and extensive replica of the cave paintings. It is created as a fissure in the landscape. The roof features a gentle broken line, echoing the hill’s undulating form. 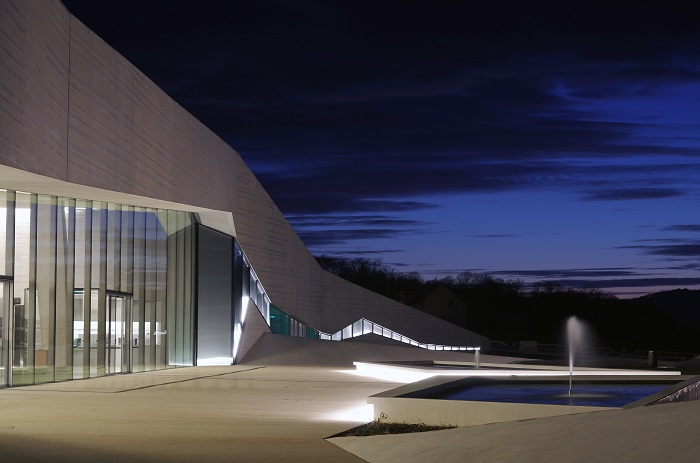 Across its length, the façade ranges from transparent to opaque, maintaining an inseparable relationship with the exterior. The walls, roof, façade strip, and both interior and exterior flooring are all made in concrete, giving the building a monolithic expression. The raw, unfinished treatment of the material evokes the mineral world, the rock of the hills, and the cave. 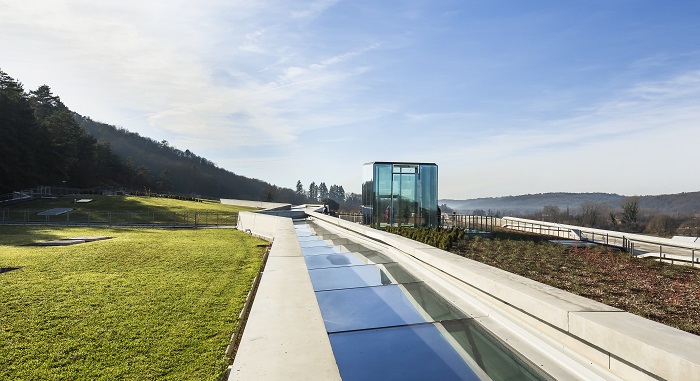 The second predominant material, glass, defines the façade and the roof of the orientation space. This central zone, running through full length of the building, is illuminated by a fissure of overhead light and evokes an almost sacred and spiritual character. 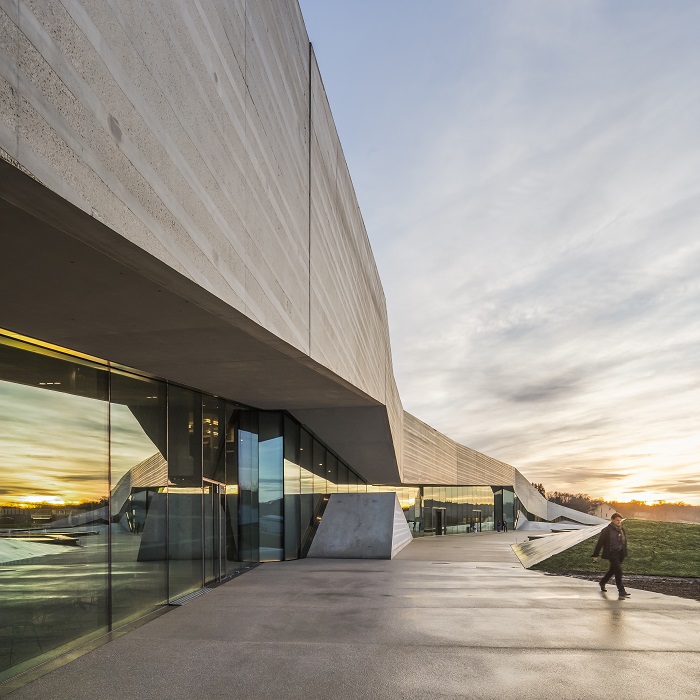 The building has been shaped by two principal sources of natural light. One is created by a lateral cut in the landscape that lifts and separate the two planes, pulling them apart to generate a vertical facade where the light enters the building horizontally. 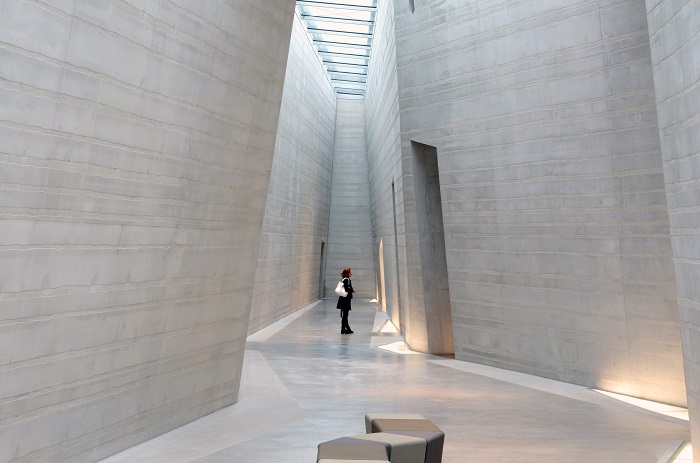 The other is a deep cut along the spine of the building, which reveals the horizontal glass surface of a skylight and allows light in vertically. The path leads to a series of diverse exhibition spaces. Beginning in the lobby, visitors ascend by a lift to the belvedere out on the roof. They then descend a gentle slope towards the cave facsimile, which follows the incline of the roof towards the edge of the forest until reaching the entrance to the replica. 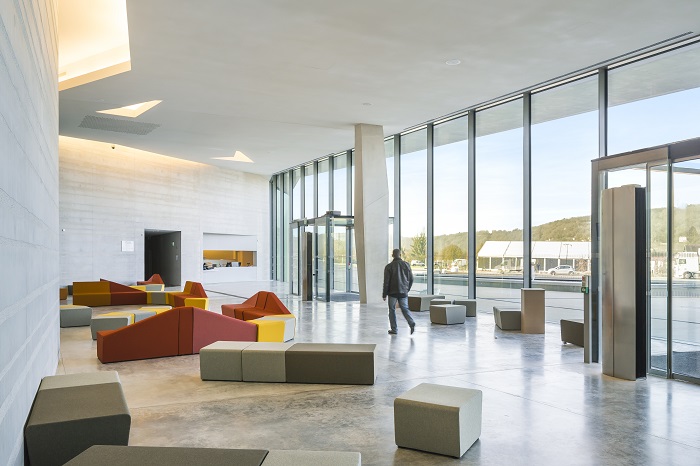 Here, the atmosphere is damp and dark, re-creating the humidity within the caves. The cave replica was developed through the most advanced 3D laser scanning and casting technologies to replicate the original cave form to a 1 mm tolerance. 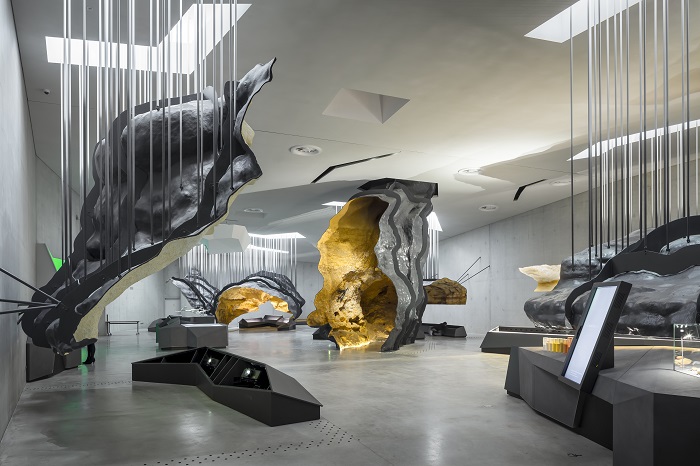 Following the construction, the caves underwent a careful analog process: 25 artists spent 2 years hand-painting 900 m of resin rock reproductions with the same pigments that the prehistoric painters used 20,000 years ago to recreate the 1900 paintings and engravings that adorn the walls of Lascaux IV. 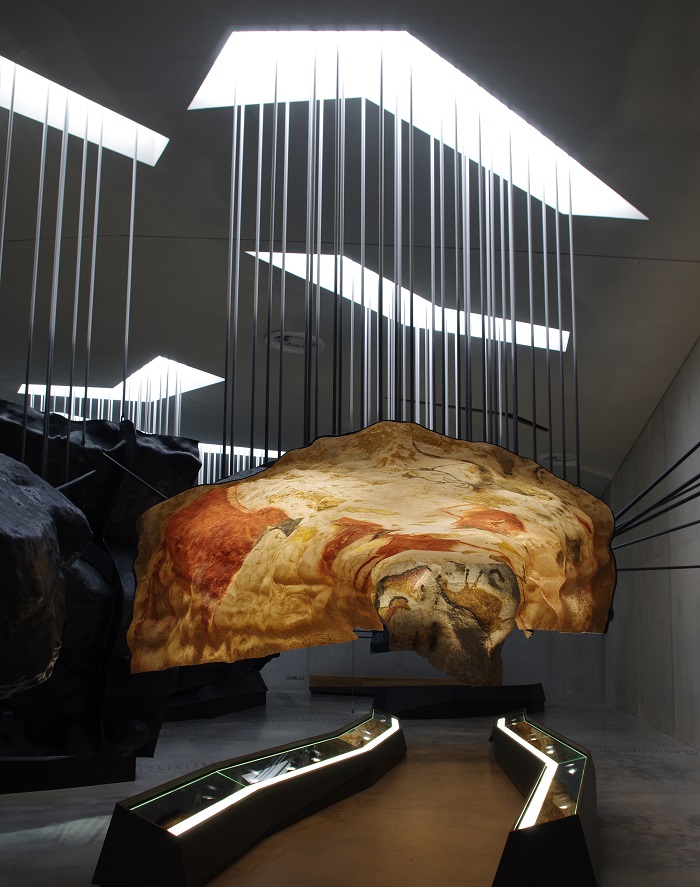 Visitors are equipped with an interactive digital companion device (CdV), a multi-media guide with audio and personalized language settings that enable them to interact with exhibits. This device liberates the gallery spaces from text panels. In the “Cinéma”, wearing 3D stereoscopic glasses visitors are taken on a digital voyage through the cave. 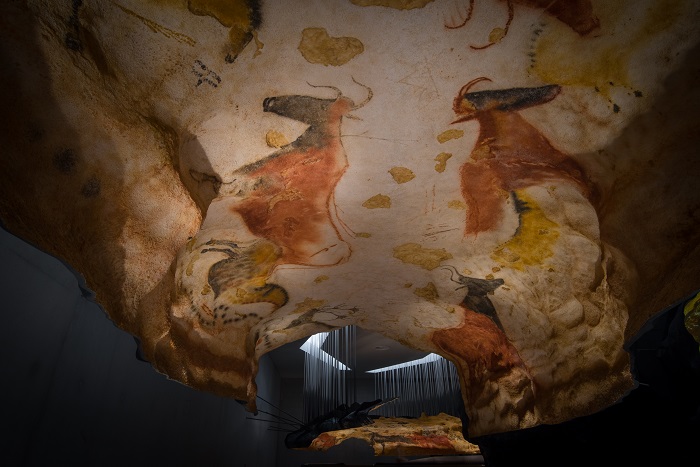 With one vertical screen and one suspended in the ceiling, the 3D tour provides exclusive access to Lascaux’s legacy, including the Cabinet of Felines, which cannot be seen anywhere else. The “Théâtre de l’art parietal” presents a three-act play using light, sound, movies and objects to give life to the story of Lascaux cave art. In the “Imagination Gallery”, curated by John Paul Jouary, professor, philosopher and author, visitors can explore the influence of prehistoric cave art on modern and contemporary artists in an interactive digital gallery. 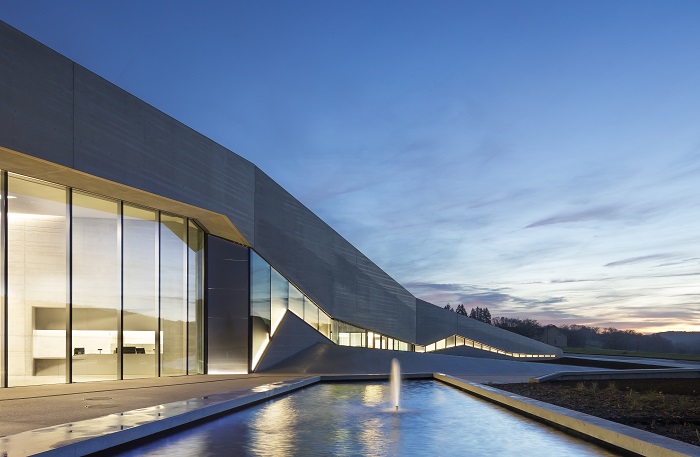