To celebrate the centenary of the building of Ground Central, the Municipal Art Society di New York (MAS) has invited a number of international architecture firms to come up with a concept for a new Ground Central Terminal and Midtown East neighbourhood, partly in relation to the new rezoning plan. SOM’s project is particularly cutting-edge and intriguing.

Even though it is only a vision, Roger Duffy, a Design Partner at SOM, has pointed out that it is actually designed to eventually be built. “The Next 100: from the perspective of the pedestrian”, is how he entitled his presentation, immediately clarifying that this study focuses around people and the possibility of making use of public space. The most striking and iconic part of the project is definitely the circular walkway around the top of Grand Central Station. Like some kind of gigantic moving platform, it can move vertically to various different heights up the skyscrapers supporting it, making it a most unusual observation point and potential new landmark for the city. A means of bringing together the various different levels of the city and reigniting (with the utmost realism) the utopian ambitions that this multilevel city had last century. SOM’s studies into public spaces are not merely confined to spectacularising them, the firm is also taking a careful look at a specific town-planning issue. There is a whole array of small squares or even just clearings, whose origins are not obvious. The 1961 town planning scheme introduced a volumetric bonus for anybody building a ground-floor public on a 1:10 scale. 10 m² of building had to be constructed for each square metre of public square. This wonderfully innovative idea met the need to create a more liveable city based on the voluntary contribution of private players. In this context, SOM has taken a further step forward in the design of urban spaces: PFPS (Privately Funded Public Space) or, in other words, public spaces that are no longer owned but simply financed by private parties, again in exchange for a volumetric bonus. Change always calls for a balance between public and private interests. Improvements in urban spaces is where this can still happen. The general public has the responsibility for adopting an overall vision capable of raising the quality of its spaces, while private parties have the task of financing these visions.

According to Roger Duffy, this would make it possible to reconnect existing public spaces to arcades, porticos and pedestrian paths and also to create new public spaces, even pushing the bounds of our imagination in the direction of a multi-level city. If we began thinking along these lines, Midtown East would soon provide us with a highly successful example. Paraphrasing the famous article that William Whyte asked Jane Jacobs to publish in “Fortune” in 1958, we could say that: “Midtown is for people”. Niccolò Baldi 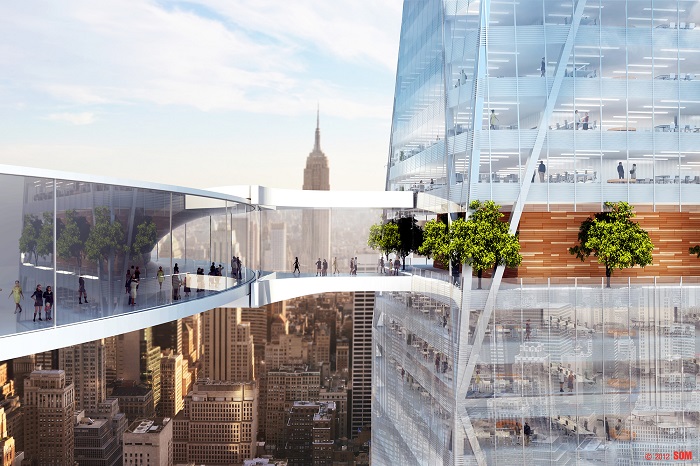