This is a project to convert a 25-yearold office building located along a side street in the Omotesando district of Tokyo. The building has been totally modernised to revitalise the local neighbourhood, enhance its value and accommodate commercial spaces.

The client was looking for a project that would make its facade stand out from those of neighbouring buildings, so that it could offer something special for future tenants. Amano decided to focus on a design with soft lines that passers-by could admire, which, at the same time, would really catch the eye among all the surrounding buildings, whose physical features and traits are much harsher. By removing as much of the decorative cornice from the structure of the existing building as possible (now outmoded), its basic form was once again exposed. Computer-designed metallic strip shutters were then added on to give it a more cuttingedge feel evoking the soft lines of drapery. The “soft” appearance of the shutters was achieved by three-dimensionally connecting together the various metallic strips by means of unaligned spokes. This apparently complex composition can, in fact, be achieved by combining just two types of spokes (700R and 1700R) and straight lines. The metal strips forming this cladding are welded to stainless steel plaques that crisscross and jet out of the building structure in the form of stainless steel tubes to create a winding functional construct. Large windows can be glimpsed through the slats in the cladding that allow light to flow inside. An outside staircase leads up from street level to just below the first floor facade, where it connects to an internal staircase joining the three above-ground floors to the two underground levels. At night-time the interiors are lit up by a system of fluorescent lighting tubes set out randomly, which add character to the otherwise basic interior finishes. the neighborhood a sense of identity. 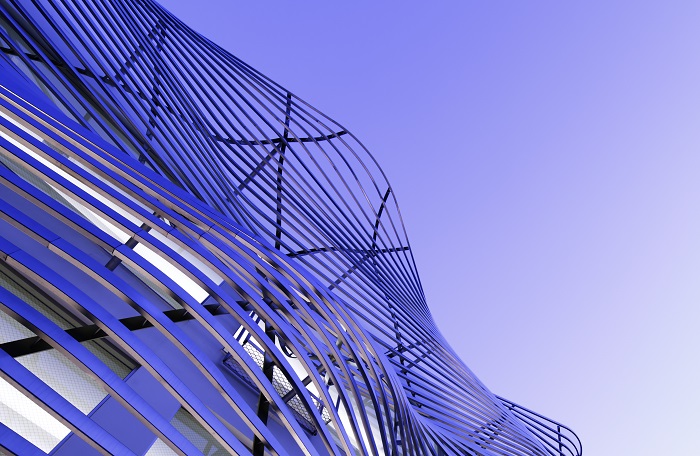