Richard England, a well-known Maltese architectural designer, was commissioned by Museum the Society of Christian Doctrine, to design a green landscape surrounded by a home for the elderly for people from the Society. The contract was an ideal opportunity to put into practice the idea of a hortus conclusus, i.e. an enclosed garden first developed in the Middle Ages for abbeys and convents that is so typical of Mediterranean culture. In the early 1980s England built the old people’s home and then this striking garden on a plot of land in the Santa Venera district, which had been donated to the Society. Envisaged as a space for enjoying experiences on various different levels, its grounding idea is embodied in the porticos inspired by the numerous paintings depicting them in Giorgio De Chirico’s Italian Squares. These canvases convey a sense of melancholy and nostalgia for a period that only exists in our memories. Here, on the contrary, the white of the porticos has been transformed into bright colours juxtaposed against the deep blue skies of the Mediterranean in an attempt to convey the real joy of life to visitors, partly through an interplay of pure forms. The entire composition is constructed along a central axis, which, however, is contradicted by a notable general sense of fluidity, due to the fact the forms seem to have been placed almost randomly across the ground. A dual combination of enclosed spaces, including the main assembly hall and foyer, leads down to the lower level and garden area. Here the architect has combined a sequence of open-air transition spaces and more intimate enclosed spaces. The thresholds marking this transition seem to be clearly defined an d are intended to mediate between the spaces allocated for informal walks and recreation and those allocated for private contemplation and meditation. Of course, just like any Mediterranean garden, water is present in various forms and acts as a kind of natural balm, particularly in summer. Water actually borders around the meditation chapel at the other end of the complex. This chapel, which verges on the inexpressible, is an authentic sancta sanctorum, in striking contrast with the sculptural forms and bright colours of the outside environment. It is set in an enclosed space surrounded by white walls, except for the inside wall that is electric blue-coloured. The perimeter of the floor is surrounded by water flowing across white marble cobbles. It feel s as if you are walking along a pathway physically detached from the surrounding environment, a mythical transition into introspection and transcendental meditation. 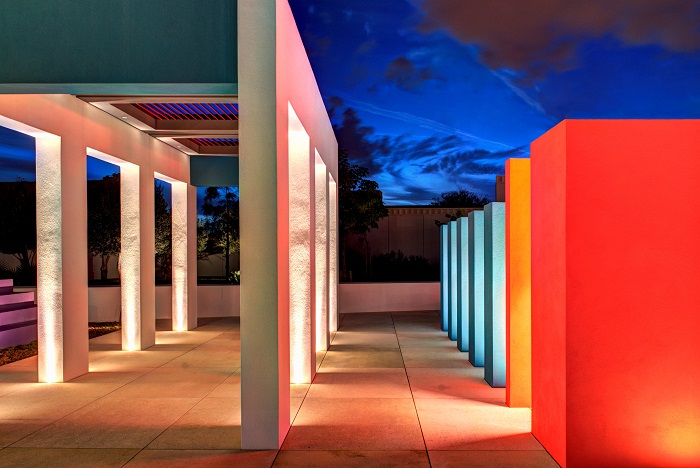