The project is set in a green ring around the centre of UNESCO protected town of Toruń. The auditorium is designed to cover half of the area of the site to give the remaining area to the park. The small height allows the building to blend with the surroundings, and the visual effect achieved is of a natural object, a rock. The interior is marked by the presence of the red brick, crashed and melted into concrete. The exterior is made of almost white concrete. As the concrete shell is cut and carved away, shades of red appear as the lining in its holes. The building’s use of material is a reinterpretation of the traditional use of brick in the city. The interplay of red and white emphasizes the dichotomy between the modern and historic architecture. While the concert hall’s outer skin remains rigid, inside, the building acts like a fluid that brings together the different functions, its many different co-existing elements, slowly combining them and playing off each other. The theatre space is able to adapt easily to different capacities, it may change like a sponge. Thanks to its dynamic ceiling, the building can be tuned to effectively absorb symphonic performances, chamber, theatre, opera, and film and meet any acoustic requirements the theatre designer requires. Finally, the concert hall can open to the outside, allowing to join the interior stage with the park outside for outdoor performances and events like rock or pop concerts and other kind of massive gatherings. Picado, an innovative technique, conceived by Fernando Menis, consisting of mixing concrete with other materials and break it afterwards, is used in the entire building. Besides achieving a rough expression, the picado allows excellent acoustics results. 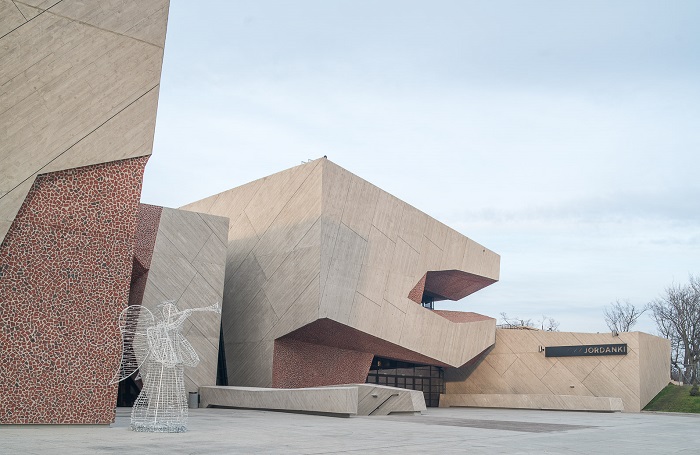