After the launching of an initial housing project in 2015, the Nice Méridia technological centre (urban masterplan by Christian Devillers) is inventing the habitat of tomorrow right in the heart of Eco-Vallée. Designed by Jean Nouvel and constructed by AMETIS PACA, this centre, which stands around the edges of what is destined to be a park, involves the construction of 125 apartments spread over two buildings covering a total area of 8500 m² with 180 m² of ground-floor utility space, all aimed at rejuvenating the neighbourhood. The entire project is based around Jean Nouvel’s decision to focus on the quality of the new habitat. Each apartment is exposed on both sides and has wide views towards the outside. An outside space acts as an extension to the living space providing a supplementary setting for enjoying the Mediterranean climate. The large central garden that is inspired by the big valleys running through the hills around the River Var contributes to creating a comfortable summer environment. A fault plane planted with trees and shrubs will make this an even fresher environment, also drawing in natural ventilation for the underground car parks. The residential buildings are planned to officially open towards the end of 2018 or early 2019. An office building and retail spaces designed by Nicolas Laisné and Dimitri Roussel and built by Pitch Promotion PACA is another project specially designed for Nice Méridia. The architects have envisaged an ideal working environment for a Mediterranean climate, with balconies designed to allow outdoor work and facades livened up by landscaping. This project for 6300 m² of offices set over 8 floors with 640 m² of ground-floor shops and underground car parks is planned to open by the end of 2017. 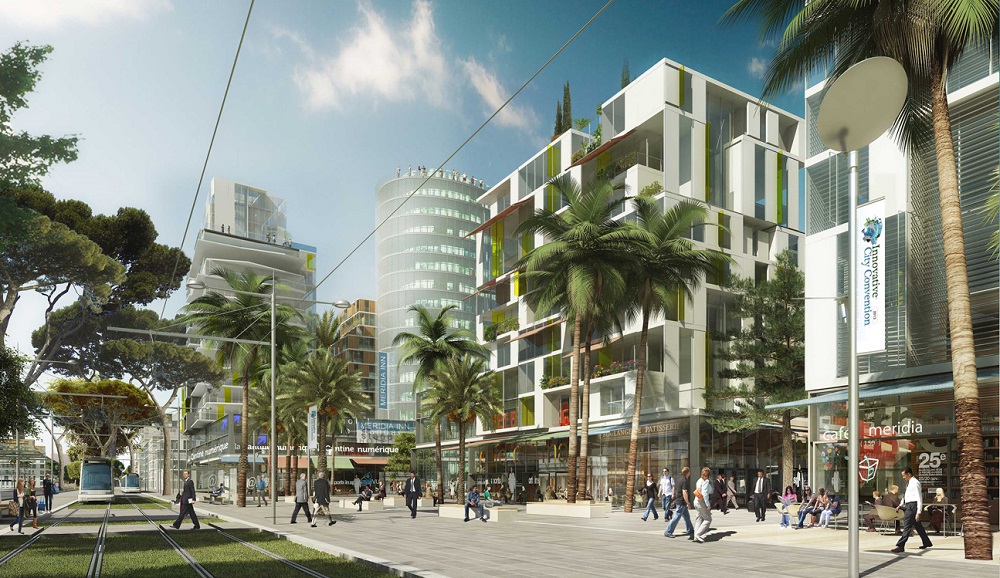