A Building that approaches Land Art. The new Hôtel des Communes (Community of Municipalities offices) was built as an extension of the Herbiers City Hall, a mid-19th century mension situated in a public park. The contemporary architecture of the new building provides its citizens with a custom, high-performing tool that reconciles landscape, architectural heritage, and modernity. It is an expression of the region’s territorial influence and of the high level local cooperation. The Hôtel des Communes represents a sculptural kind of architecture that approaches Land Art. It is a smart and spectacular building that capitalizes on the strengths of its site – the public park, the trees, and the current city hall – to insert itself gently into the landscape. Supple and athletic, it coils around the existing trees, surrounding them to preserve them. It pushes up into the sky and outward into the park, finding its place without upsetting the harmoniousness of the place. It slaloms lightly and gracefully, and its skin uses the path of the sun to its best advantage. Despite its size, it only reveals part of its whole. The visible sides, which are proportionate to the surrounding buildings, blend into the urban landscape, while its curves and texture make the building a singular event in the town. As an installation, it hides from view under the reflection of the surrounding landscape on its skin, as if it were a chameleon. The intelligence of the building’s form resides in the way it increases the size of the façade and thus the workspaces while reducing the technical areas to their necessary minimum. Offices in the Hôtel des Communes are grouped into compact, effective clusters to create greater work synergies. The ground floor hosts the offices that provide public services (civil registrar, marriage hall, etc.). The spaces on the upper floors were designed to be effective and flexible, on the basis of the principle of modular offices. The curving and counter-curving circulations connect one space to another. They allow people to walk through the building or enter the existing town hall fluidly, with a sense of continuity, all the while remaining immersed in the surrounding park’s greenery. 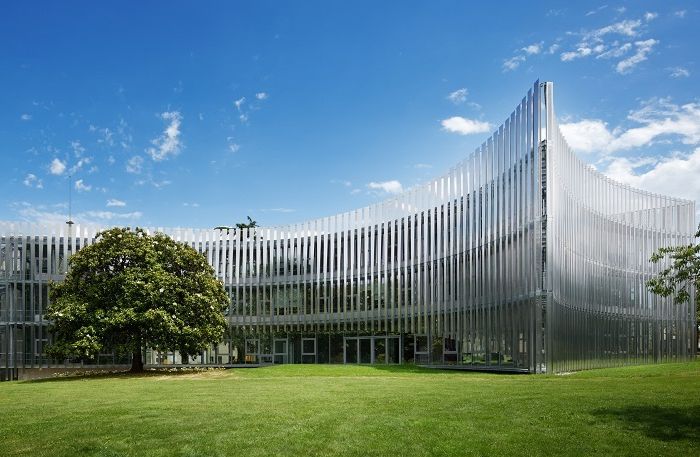